​Although most of my painting takes place in the studio, the inspiration for the scene has come from the great outdoors. For certain, there’s no lack of subject material down here in the far west of Cornwall.
When out on a reccy I carry a back pack of watercolours, charcoal, pencils and a sketchbook.  I also have my camera. It is, of course, impossible to compare a sketch with a photograph as each method captures an entirely different viewpoint.
When sketching I pick up the immediacy of the situation and focus on the instant impression of the scene. The lighthouse on the horizon appears huge, the swooping gulls loom in the foreground but I haven’t time to think about shadow and the light source. So I take a few snaps and then make notes.

Studio Sketch
Sometimes when I am back at home I’ll plan a more detailed sketch from my visual memory and use it as source material giving me loads of choices for the final painting. 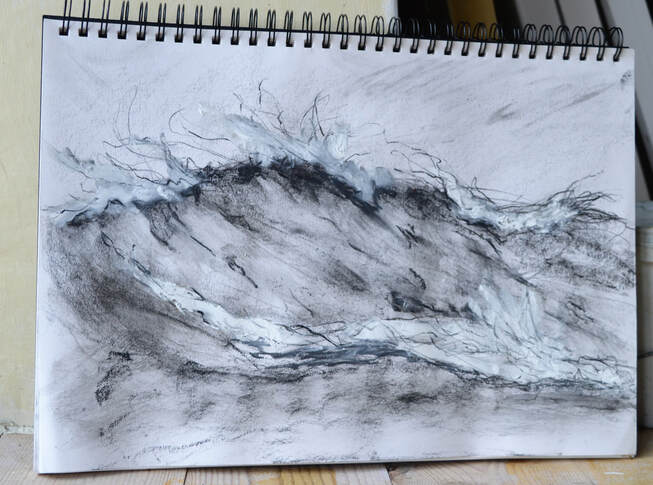 ​It goes without saying that this type of sketching method is enormously pleasurable. I am under no pressure to create the exact wave and am literally basking in the freedom of charcoal. 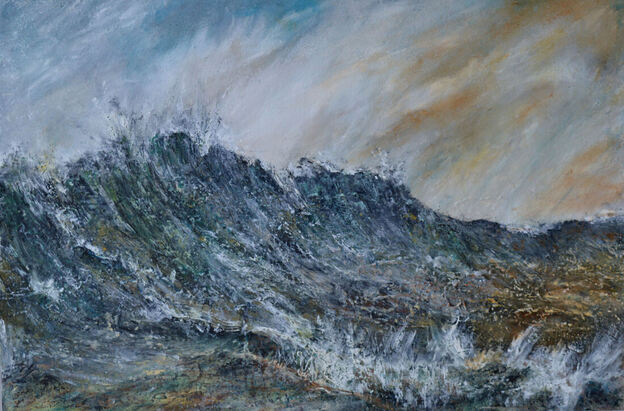 ​In this instance I have used no material from my outdoor expedition but relied on the emotion of the churning sea to see me through the painting.

The Photograph
A photograph can come in handy when trying to capture a wave as it has been and gone in seconds. I like to edit the photo to enhance the light and shade which is a great prop when back in the studio.

​Of course I am very fortunate in that I can always revisit a scene to gain further insight into ‘how’ to make a painting come alive.
Seascapes in particular require note-taking and a visual impression so that the creative process can be released.


Plein Air Sketch
As I love swimming I am frequently in Newlyn or Penzance and enjoy the familiarity of the coastline. It takes only a few minutes to scratch out a quick sketch of Sandy Cove after a swim.
​There really is no skill here, it is a hasty response to a rather torrid plunge. However the composition has worked and I am delighted with the way the eye is drawn to the little red cap of the lighthouse. Using sea water I wet the watercolour paper and applied pigment, tipping the paper back and forth to create runs.  A little kitchen roll helps the cloud formation and white gouache creates the frothing wave crests. 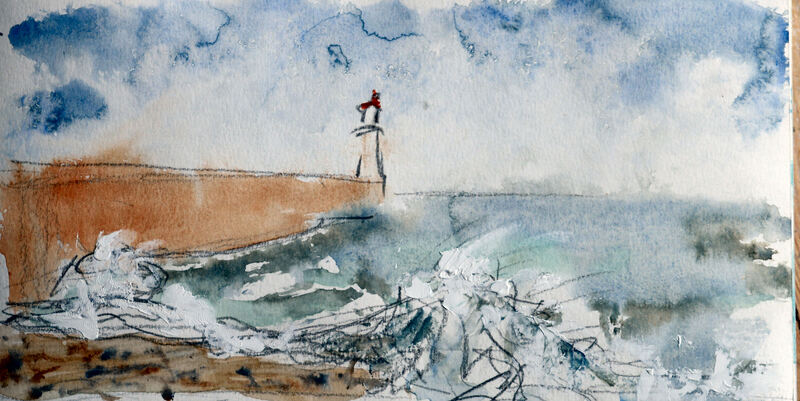 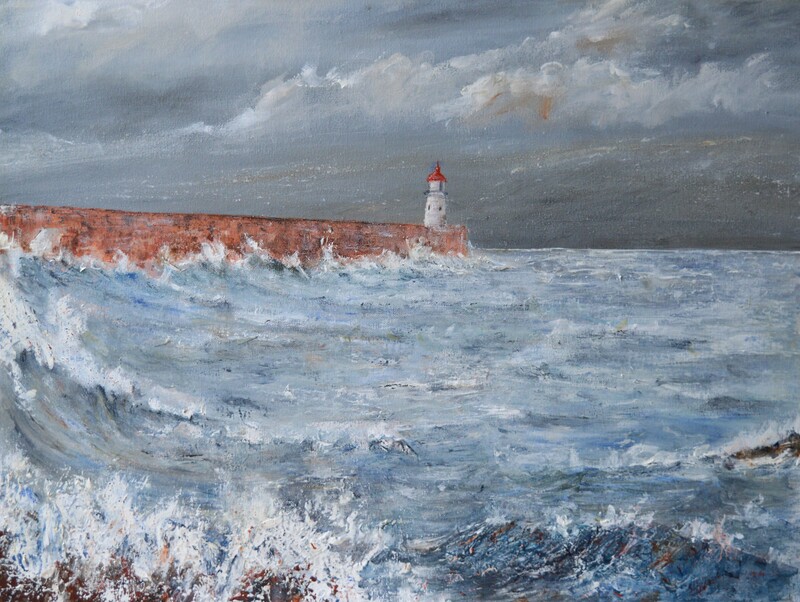 Finding that same immediacy on canvas is annoyingly hard. However I set to with gusto.

It is worth noting that whereas my sketch takes approximately 6 minutes to complete the oil on canvas is six weeks in the making. Why? I don’t really know. It is something to do with achieving the right level of detail and then undoing the work to create a little zest.
Also the sea requires many layers to convey depth and I am now used to the long, construction process followed by a couple of quick sessions of destruction.

Colour photography
One of the hardest subjects is a totally calm sea on a clear day. Something the late John Miller could achieve with consummate ease and skill.  I have a plan for my next large painting and it is of Porthmeor Beach on a stunning clear day in October. 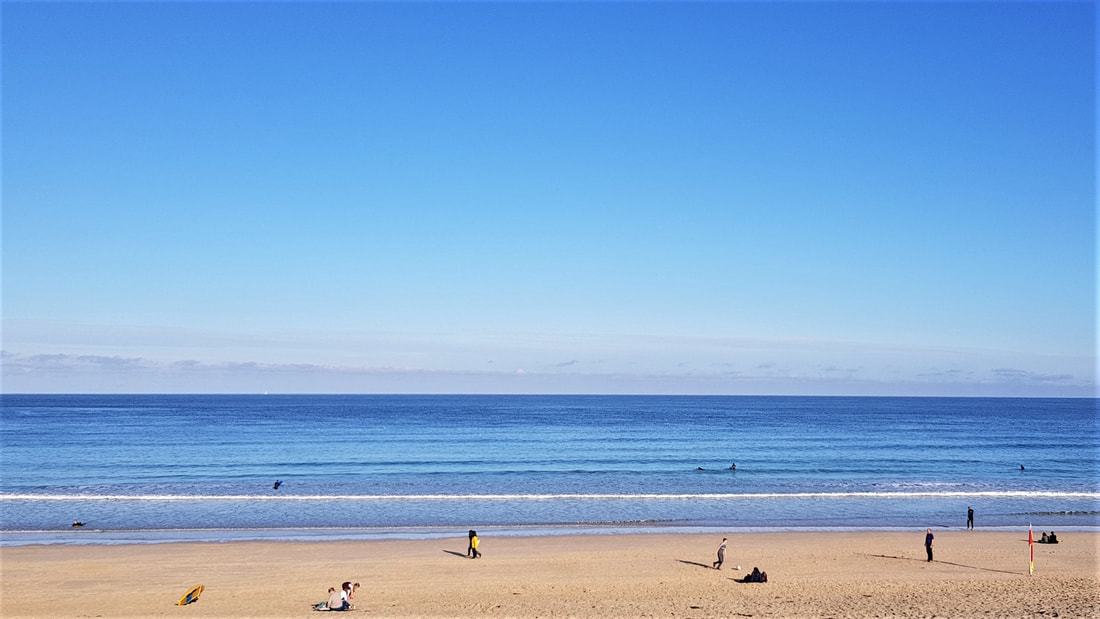 ​I’ve visited the beach for decades and know it intimately. There’s no need to sketch the scene but the photograph reproduces the gradation of colour in sky on a most excellent manner.  Equally I can see swell lines and shadow.

A Blank Canvas
I plan to sketch out the figures to see if any could be overlaid onto the seascape.  But all this happens in the studio.
On this particular day the sketchbook remained in my bag. The memory is with me and I wonder what will happen next.

Very tentatively I try out a cool blue seascape on a small board. It is surprisingly hard to recreate this simple composition in the studio. Eventually I manage to coax out a clear blue sea. Figures seemed to complicate the painting so I am happy to leave the beach empty. I call the piece "July" although the reader must realise that beaches in St Ives are rarely empty in July. 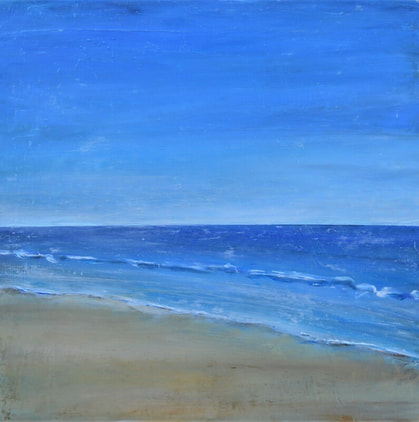