To escape these turbulent times I figured that staying calm was an essential requisite.  To  convey tranquillity  would represent  a serious step forward in my art practise.

Dear Simon spent a day grafting in the workshop to produce two  frames measuring  3 ft by 5 ft for which I had some cotton canvas.  Due to lockdown, walking locally was our choice of daily exercise and living in the Cornish version of Eden, it wasn’t long before we discovered many new woodland walks. One of our favourites was the walk through Sancreed and on to Drift Reservoir.

​The calm still waters were the perfect antidote for a cluttered mind.  Using the memory of autumn walks on the Helford and the experiences of the reservoir I was able, at last, to create something satisfying. 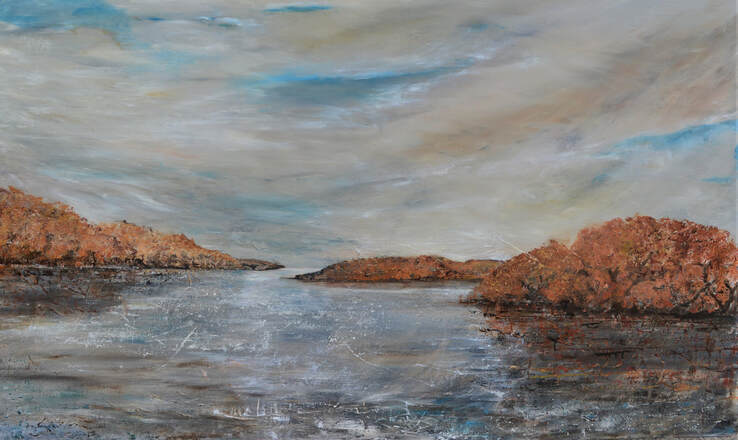 GOING GREEN
To increase the challenge I now opted to tackle my own personal bete-noir: The colour green.

.One of the disadvantages of inland waters is that there is little movement. Unlike the sea, a lake is not fiery. A river has to be in full spate to reveal all the power and glory of a maritime wave.

March, April and May were dry months. The streams no longer raged, they dribbled and there was no sound on the reservoir but the honk of Canada geese and the soft plash of water on shingle.
​
Depicting calm inland waters was hard enough but for me, going green was well nigh impossible.

I soon discovered the polar opposite. The glory of reflection was beyond my dreams. The interest was right in front of my eyes on the water's surface..  Every tree and every little island was mirrored greenly in the water. Shivering and re-shaping as a bird took off, or a little eddy of wind riffled across the lake, these reflections became animated.
​Elongated in vertical fashion the mirrored greens  were an artist’s dream. I couldn’t wait to have a go.
When Simon and I received a message from a naturalist friend saying that there were otters on periphery of the local reservoir, we donned our walking boots and crept out to the spot where they were seen playing. 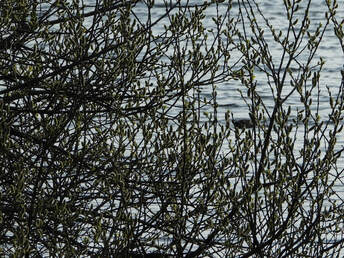 ​      Head of an otter spotted by Dave Flumm. Their first visual sighting for 10 years
​.
We were not so lucky and missed the otters . Maybe it was my aquamarine coat and red trousers that gave the game away but we did discover the most beautiful spot tucked right down the eastern end of the reservoir. 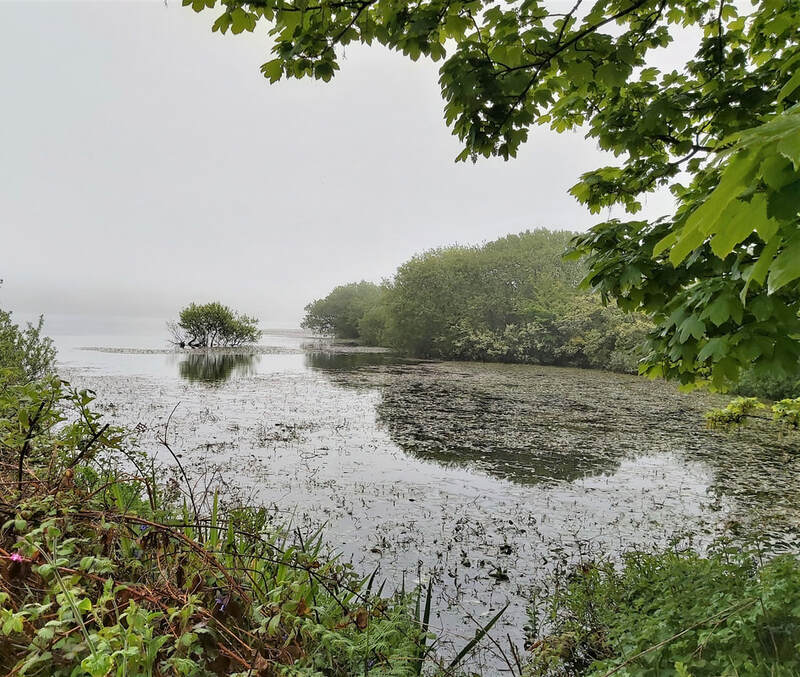 We sat quietly while I made copious notes and fiddled with a few sketches. The little backwater made an ideal composition and the photo looked like something from Monet’s own portfolio.
Could this look better in paint? I doubted it. There was only one solution and that was to represent the scene as accurately as I could manage.

It wasn’t hard to make an emotional connection with this place. Both Simon and I became involved with the scene. We returned again and again just loving the chatter of birds in the reeds, the emergence of the yellow flag iris and the spreading of the water lilies on the water’s surface.

Everything was lush and still. And the greens were so fresh they were almost yellow.

So all of a sudden after years of avoiding the sharp acidity of green I was revelling in the many different shades. There were deep dark recesses at the base of the tree whilst in the canopy, leaves twinkled and glittered with light. All these details I took down as a reminder of our visits.

Back in the studio I primed the canvas with a thick white gesso and then blocked out in acrylic. So before I’d even started I could guarantee some unusual marks lying beneath the surface. This will help loosen what will become quite a figurative scene. 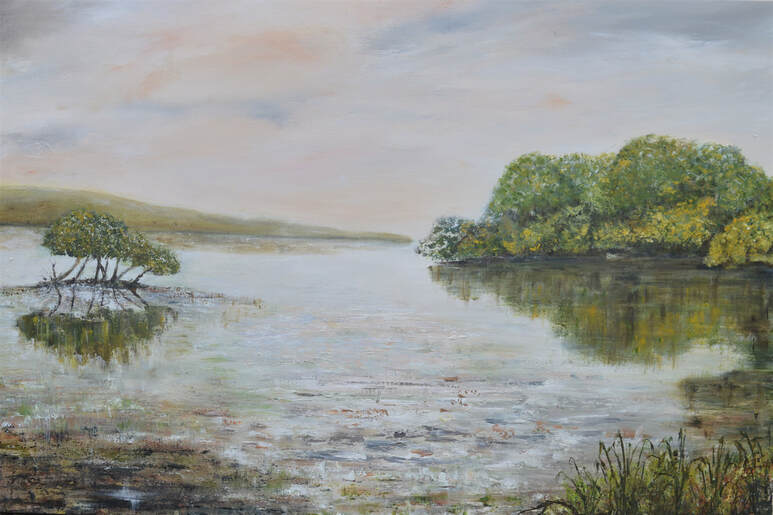 Final Painting 'Where the Otters Play' and why it worked for me.
Copyright (c) 2010 Penny Rumble