This has been the most extraordinary year of my life.
A year with so much going on and yet so little.

The first lockdown last March was a fearful time for all of us as the news announcements became bleaker by the day. The A30 was silent and even the spring brouhaha of birds was muted.
Inspiration deserted me. I was too anxious to concentrate.  Gradually, as Simon and I took our local walks, I recovered.  My eyes feasted on new growth and the still waters of our local reservoir.

​Out came the sketchbook and a few ideas took root. 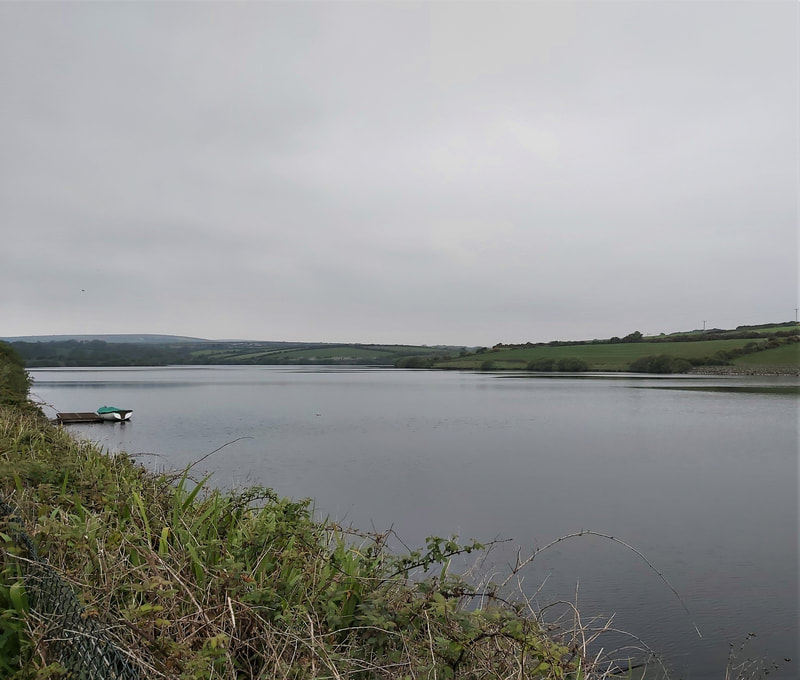 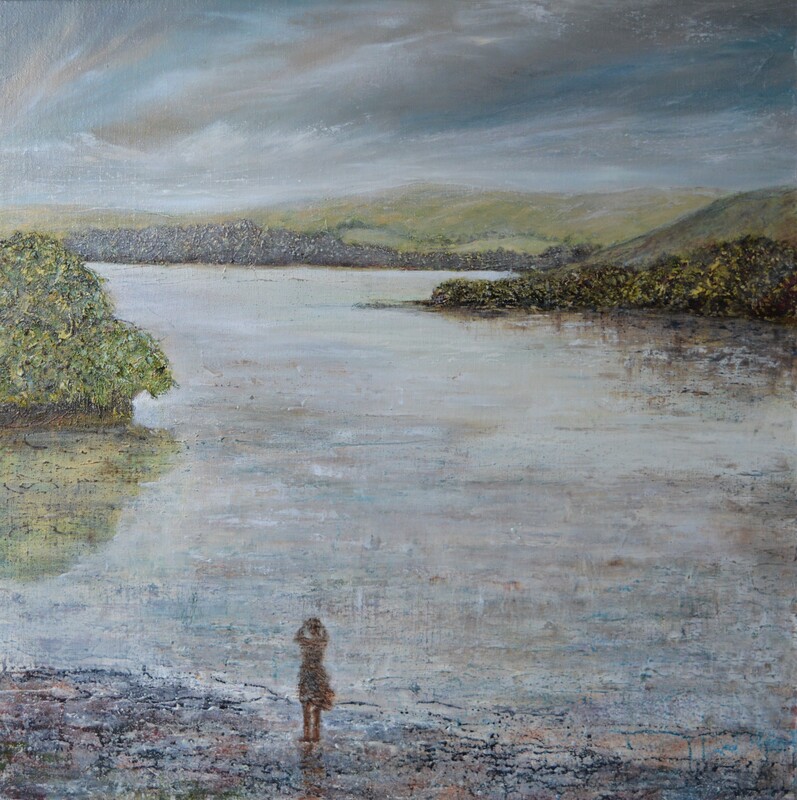 Searching For Sandpipers
We discovered a kind of peace as the world held its breath and it seemed that the planet had been granted a reprieve.

With hotels, galleries and exhibition venues all closed there was no hope of an income so I shelved economic worries for a time and thought only of painting.

​Simon gave me a night camera to capture animal activity in the woods opposite our house. I have breath-taking film of foxes and badgers and it is only now, a year later,  that I am beginning to use this material in my work. 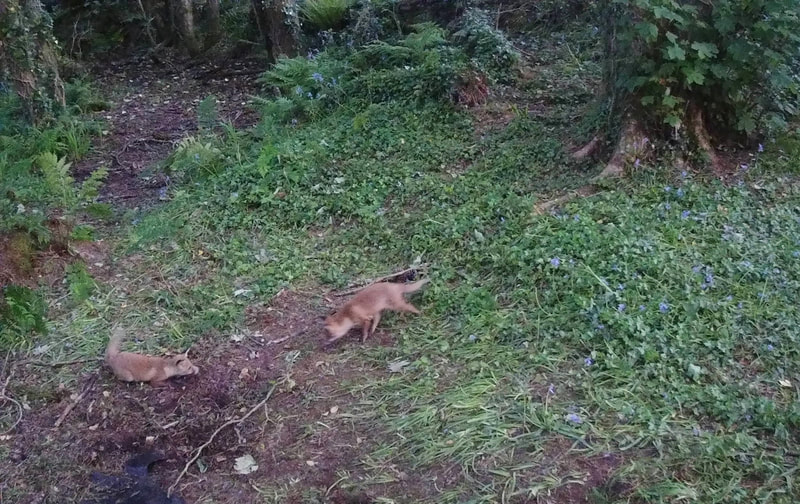 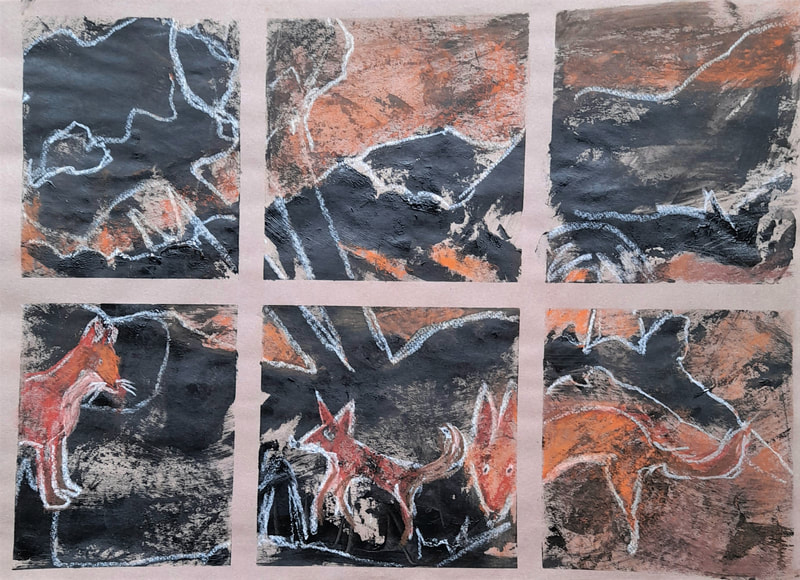 Sketches begun almost a year later
Nature Walks
The time came when we could meet up with friends so Simon and I teamed up with naturalists Dave and Gerda Flumm to walk the local coastline. Stopping every 30 seconds to identify a bird or a wild flower, we covered very little distance but accumulated so much knowledge that I had to write it all down the following evening. These walks of observance prompted more inspiration. 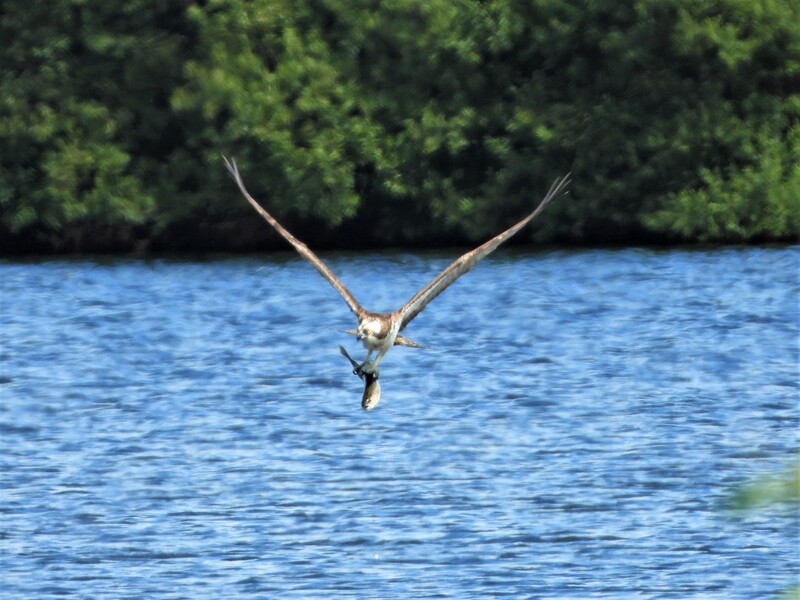 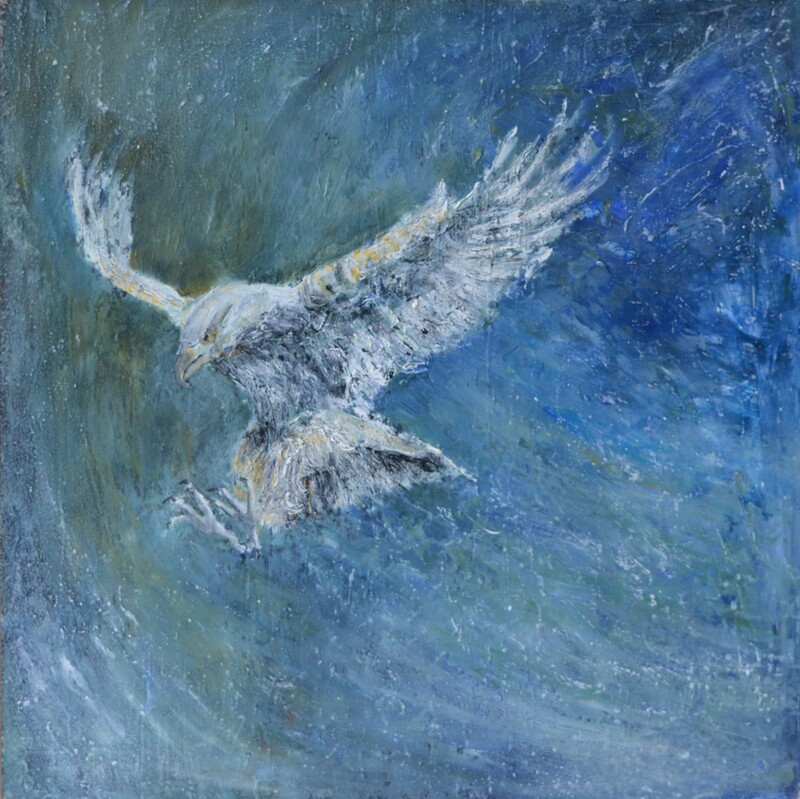 Flight Path
And then the country opened up for the summer and my seascapes began to sell again. It was a brief but welcome respite from our wary state of amber alert and I was back on the ocean again both literally and figuratively.

Tentative entry into the water

Tidal Surge: Part of the Sea Studies Collection
YouTube Film
At the beginning of the year I began to make a short film with friends Alex and Ian Atherton. The project, which began in January ended abruptly two months later. Six months down the line and we finally finish filming.  Edited and released in September it now sits comfortably on YouTube. I marvel at the talent of the filmmakers. They did me proud.

St Ives Show
The release coincided with my annual show in St Ives which is always a stressful occasion as I have to transport over 70 paintings. But with family help, the hanging went smoothly and speedily. The following fortnight was busy and positive, despite the growing tension.  I found it quite difficult to communicate through a mask but we were all in the same boat and I learned to speak clearly and quite loudly as we all focussed on the language of eyes. 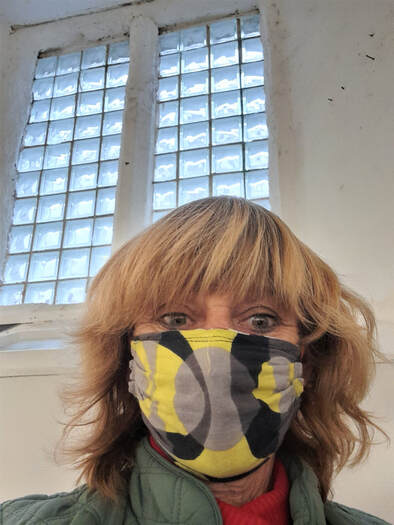 The Masked Curator
Winter Lockdowns
Then came the second lockdown – it was more of a relief than a surprise and I was already in the painting zone.  Winter gave us something to be grateful for:  a spate of fiery dusks and dawns.
An orchestra of colour filled the sky on so many mornings when we walked Poppy. In the evenings we hot-footed it to the cliffs to watch the blaze of colour as our sun sank below the horizon.
The creative juices overflowed. 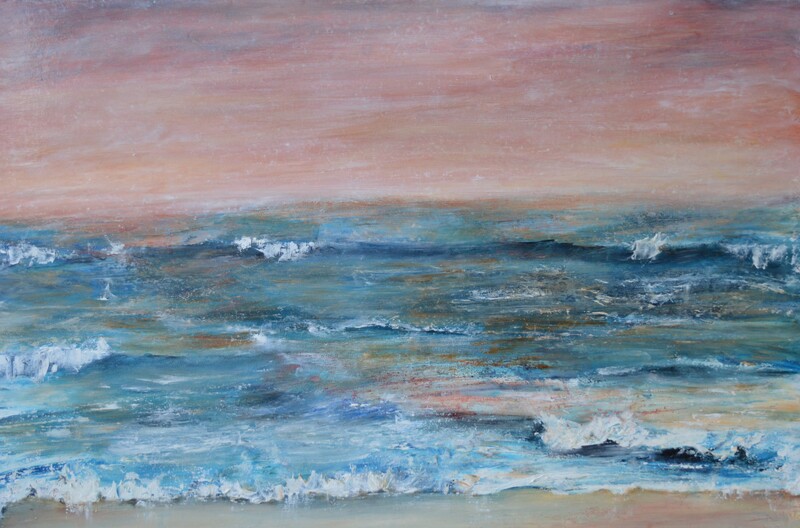 The Dying of the Light
Storm Season
All through the winter I painted variations on this theme until finally, in February, coral skies gave way to the greys of the storm season.  With the sea a dangerous looking green, angry waves pounded the shores of Mount’s Bay and I was there:  on the Prom with sketchbook and camera. 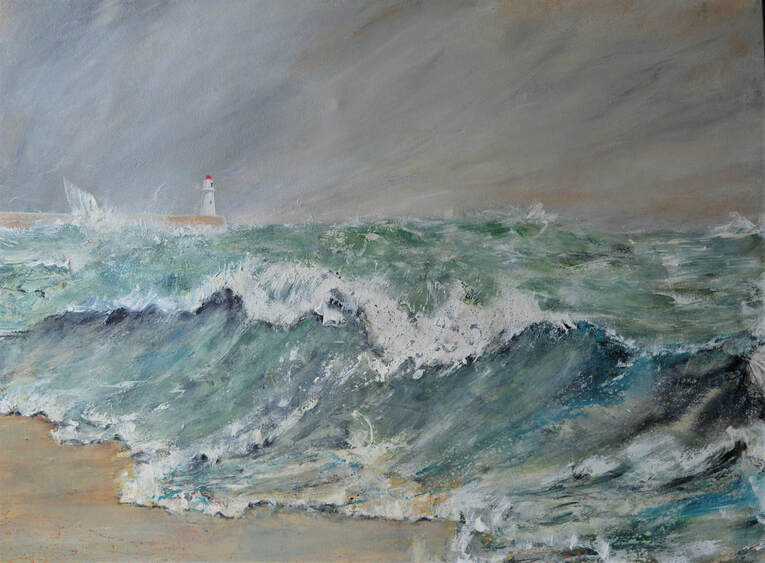 A Quite Extraordinary Day
Changing Direction
But I interrupted myself and while I continued to storm watch, I booked an online course in Abstracting the Landscape by Anita Reynolds.
It is very easy for artists who work alone to constrict their style. Well, it’s easy for me and I was conscious of a certain tightening in my paintings that I didn’t like.  The diversion took me onto moors   and cliff edges.  With charcoal and gridded paper I was soon thrashing away with great joy.  This was the more pleasurable aspect of my art where nothing mattered. It was time to experiment. 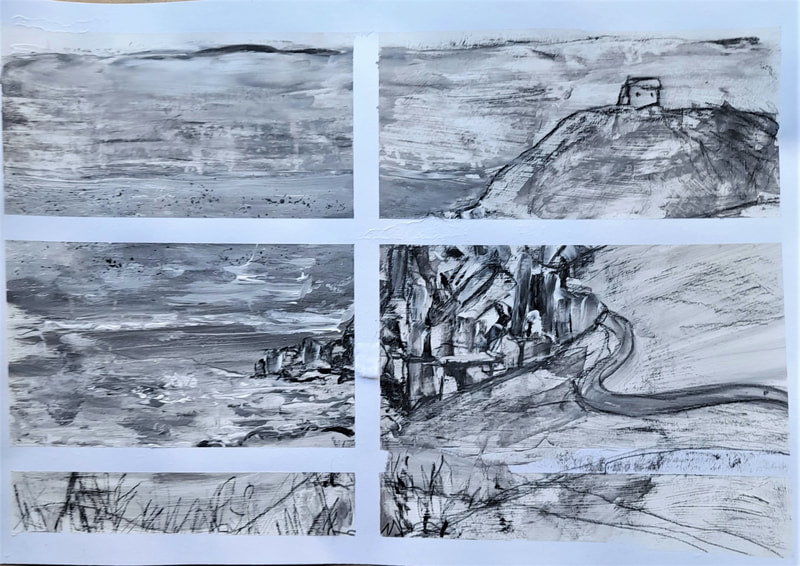 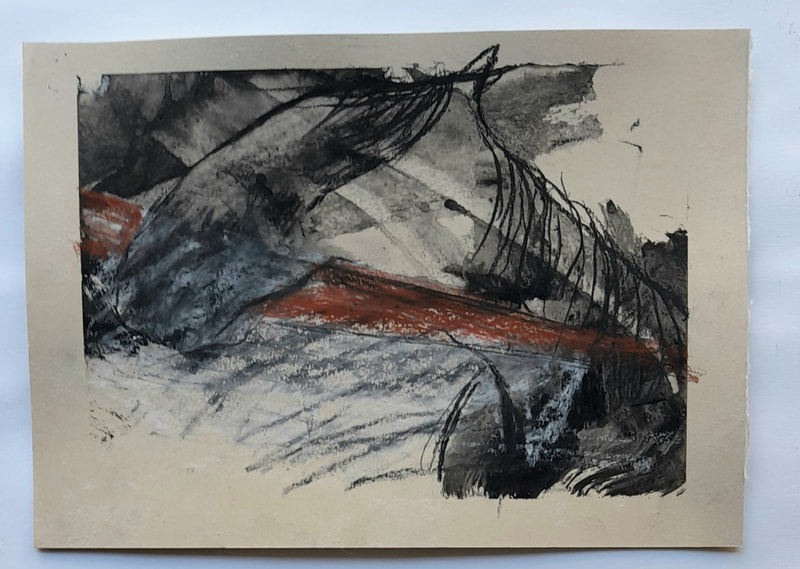 Dartmoor pony refusing me entry to Sancreed Beacon
I now have over 50 sketches and drawings of different locations which should keep me going for over a year because surprisingly, there is something in those sketches. I can revisit the sites at any time as well as tap into the course for over a year. What a great idea by the Newlyn School.

Looking Ahead
With a couple of teaching weekends under my belt that proceeded successfully despite restrictions, I am now very optimistic about the future of both art and humanity.

Art has been encouraged and represented well on the media.  Everyone can find fun in art, and yes, we can all paint. 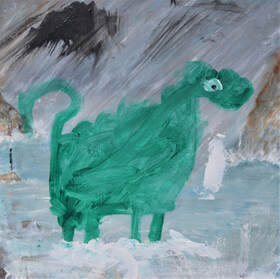 ​                 Mesosaur painted by my 5 year old grandson over a part primed canvas that he thought needed perking up a little.
​​As for humanity, I think we are much more aware of the world we share with other living forms.
Is this a result of the pandemic and the strictures in which we have had to live? I don’t know but I do believe an era of hope, restoration and preservation beckons. 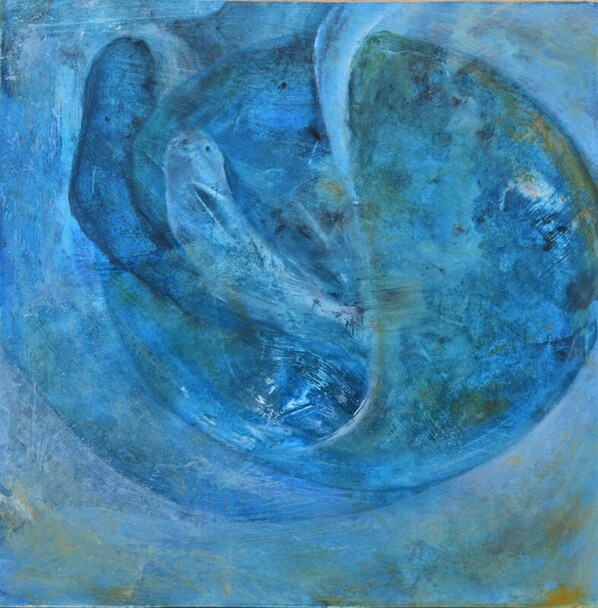 The World In Our Hands
Copyright (c) 2010 Penny Rumble